Bus shelters are no longer designed only to wait the bus. Why has Paris City Hall changed the bus shelters?

Dozens of new bus shelters have been installed in the streets of Paris within the last weeks. French mayor of Paris Anne Hidalgo launched the project in 2015. Both Paris City Hall and JCDecaux, the French leading advertising company, were in charge of the project. Design agency ‘Aurel design urbain’ drew the roof as an evocation of a maple leaf to remind the famous Parisian subway stations created by Hector Guimard.

Let’s have a look at the project to discover the new features of this connected urban furniture.

New bus shelters? What for?

The installation of a new generation of bus shelters is the first step towards a dynamic urban metropolis. The objective of the City Hall for the next twenty years is to turn Paris into a green, accessible and connected city. First of all, Paris wants to improve the accessibility for disabled people. The new bus shelter are designed to help people with a wheelchair to take the bus.

The energy consumption and the carbon footprint have become one of the major preoccupations for political leaders and more particularly in big cities such as Paris. Anne Hidalgo, the mayor of Paris has set ambitious targets to reach by 2050. She plans to cut the greenhouse gas emissions by 75% and to produce 25% of the energy needs through renewable sources. 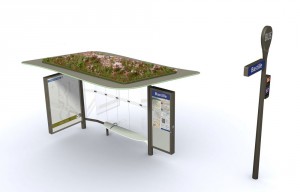 Transportation has an important role to play in the transition to a more responsible city. Not only the City Hall wants to limit the traffic in the streets but it also wants to turn the common transportation into an environmentally friendly solutions. The new bus shelters are part of this transition. Thanks to a better management of the display and of the public lighting, the energy consumption is 35% lower than for the last generation of bus shelter. Most of all, solar panels on the roof may provide power for the bus shelters. This also take part of the green strategy of Paris as flowers and vegetation may cover the roof.

The Paris City Hall has been communicating on its objectives for several years: Paris must become a leading model of Smart City in the world. To reach this goal, Paris put forwards the quality of the urban services, the technological innovations and an efficient flow management. An simple example of this strategy is the USB port available on the shelters. The city-dwellers can recharge the battery of their mobile phone while waiting for the bus. No more worries to have a phone running out of power at the end of the workday.

Touchpads in the city 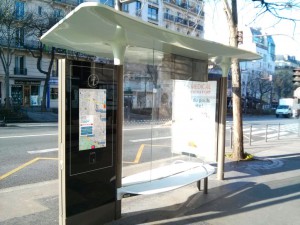 coChange App is available on the touchpads

But the most important improvement is that the bus shelters are equipped with a 32-inch touchpad. The device is designed to provide services to help the Parisians and the tourists. Users have access to some twenty useful services for everyday life. Among them, they have access to ‘Next Stop Paris’, the mobile app created by the public transport company of Paris to guide passengers. Other apps allow people to rent a stroller for the weekend or to find the cultural events in the next days. The coChange app helps the tourists that need to exchange their foreign currency by comparing the exchange offices around.

The Paris City Hall requested the Welcome City Lab (the French incubator dedicated to tourism) to select the 26 most useful mobile apps to be installed on the touch screens. The Mayor’s choice shows that the Paris leaders want to improve the experience of the tourists visiting Paris. The French capital has to face a decrease in the number of tourists and politicians do not want this situation to continue. They want to show an image of a dynamic and safe city open to the world. This smart touchpad, available in 3 languages, is a part of the strategy to help tourists to save time and money and to enjoy the best of Paris.

Next Stop Paris, coChange and some other apps available on the new smart bus shelters

And what about coChange? 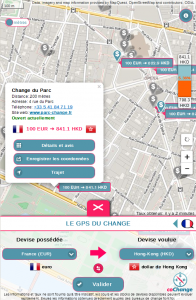 The coChange app helps the tourists to easily exchange their money

The jury, formed by the Paris City Hall, JCDecaux and the Welcome City Lab, rewarded coChange for the innovative role played in the tourist sector in Paris. The app is now installed on every connected bus shelter in Paris. It gives to tourists and the Parisians traveling abroad a dynamic tool to exchange their currency in the simplest manner. coChange has referenced the money exchange offices and their exchange rates in Paris. In a few clicks, users locate the foreign exchange offices, compare the services and the exchange rates and consult the reviews written by the community. To join the community and submit reviews travelers can download the free mobile app coChange on AppStore and Android.

The bus shelter app also supports the concierge service. Depending on your demand (currency, amount, location…) the coChange team finds the foreign exchange office that suits you: We negotiate the best exchange rate in an exchange office close to any place, monument or subway station.

Eventually, helping tourists to change their currency improve the image of Paris: coChange contributes to give tourists more purchasing power and more time to enjoy their trip in the most beautiful city of the world.

Map of the connected bus-shelters in Paris

“New Bus Shelters: Paris Launches Its Smart City Policy” by coChange is licensed under a Creative Commons Attribution-ShareAlike 4.0 International License.
Based on a work at https://cochange.com/paris-connected-bus-shelters-13657